So, now that I think I’m raiding with regularity, let’s talk about that.

Wrath of the Machine is actually a fun raid.  Mechanics are important, but in most cases missing something or dying doesn’t require a wipe.  This is a refreshing change from King’s Fall.  I will say, however, that having a rather chill fireteam really does help make this raid fun.  Oh…  the jumping “puzzles” aren’t bad either.

I’m going to start out by saying that almost every subclass has a place during this particular raid.  Except you Bladedancers.  You guys go somewhere else.  These are just suggestions.

Again, this really comes down to preference, but there are still preferred subclasses to use.  I’m thinking the ideal fireteam would have two of each class, but that’s in a perfect world of course.  This will also help if you intend on activating the monitors and starting the quest for Outbreak Prime.

One Defender and one Sunbreaker is ideal at least.  Perhaps even 2 Defenders.  One Sunsinger and one Stormcaller.  Two Nightstalkers.  This is just me thinking out loud, however.

It really comes down to:  Use your best judgment when choosing your loadout for each fight.  I’ll try to touch on that a little bit for each section.

I’m sorry.  This is an old habit from raiding in Everquest back in the day.  The initial part of the raid was the “Break-In.”  You had to fight your way in before the real raid started.  Fun times.  Anyway…

Jump into the raid with your fireteam and you’ll see a little bit of snowy terrain with some odds and ends pretty much everywhere and one platform across the way from you.  There are these beams of light emanating from places here and there.

I’m just going to jump right into how to do this section.  It’s straight forward and relatively easy.  Sit back, relax, and throw things at the screen if you don’t agree with me, but I’m not responsible for any damage that you may cause!

Oh, and here’s your first target.  Look at that ugly mug!  Remember it!  You’ll see it again.

First things first.  Break up into 3 teams of 2.  You’ll want to cover an area in the middle, an area on the left, and an area on the right.  I like to have two people cover the middle area (one of which will be a floater who can help out anywhere that they might be needed), one person covering the left, and one person covering the right.  The last two will be collecting voltage.  Voltage?  We’ll cover that shortly.  What are you covering?  This thing here, which there happens to be one in the middle, left, and right. 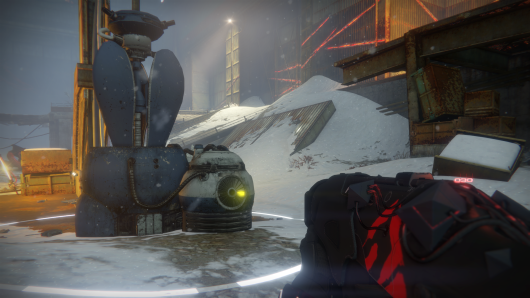 That thing there is important.  Don’t let the big ugly Voltage Eater shank get near it.  Got that?  A few well placed sniper shots will usually take it out, but keep an eye out for its two mini-me’s and the rest of the Splicers that are going to be gunning for you.  Please note the gauge in the front.  Yes, that yellow light is a gauge.  When it’s full, bombs start to fall!  That’s when the fun really begins. 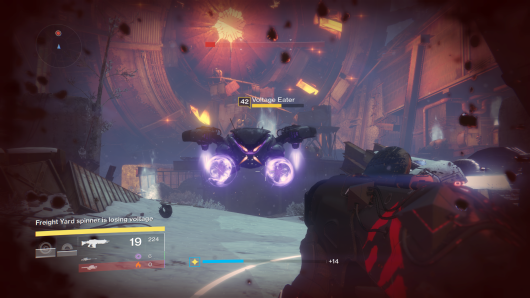 That guy there.  Kill him quick.  He’s going to drain whatever voltage that you manage to slam into the thing that you’re guarding.  Wait, what?  Slam voltage?  What are you talking about?  Oh, right.  I should tell you about that, too.  Remember those beams of light that I told you about earlier?  They look like this.  You’re going to have to run through 4 of those and then take your collected voltage and slam it in one of those three locations that the rest of your fireteam has been guarding.  Easy!

It isn’t hard to be honest, but there are a couple of things to think about.  Let’s start off by showing you just what those beams of light look like. 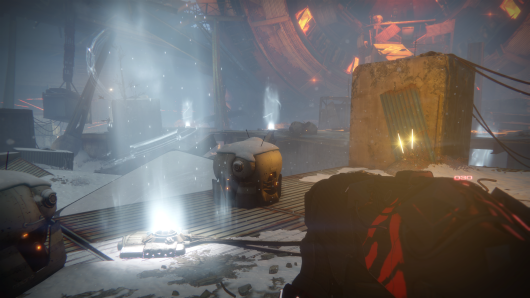 Okay, so that’s that.  If you look around the screenshot you’ll notice that there are several of those beams that you can run through.  Also, look at the bottom of the one in front of me (and marvel at my Auto Rifle).  See those cables and the emitter they are connected to?  There are many of these in this area.  Any one of them can spawn this light.  Remember, you’re going to want to run through FOUR of them.  Not 3.  Not  5.  The number shall be 4.  Bonus points for getting that reference even though the number is incorrect.

As you see in the above screenshot, I’m only at 3 Charges.  I’m not yet at the magic number of 4.  You can tell by looking at the bottom left of your screen and just above  your Super bar.  That right there.  There is also a timer.  If you do not manage to run through another beam of light, then you will explode and you will die.  Not fun.  I believe the timer is approximately 14 seconds, so you really do have plenty of time.

Oh right,  one other thing.  If you’re running on the left side, then try to stay on the left side to collect your voltage.  The same applies to the right.  You don’t want to be stealing voltage from someone else!  That could cause a death. 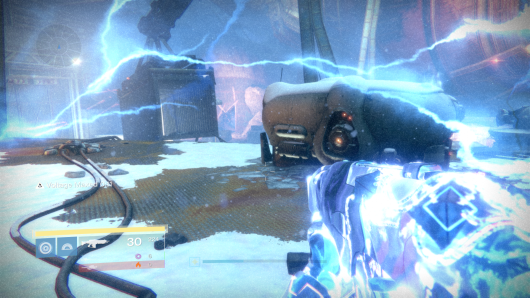 This screenshot is apparently entirely too bright to see that the text above my Super bar says “Voltage Maxed” with a timer.  What do I do now?  Why, I go and SLAM one of the collectors!

That’s what I do!  When you’ve collected 4 charges and your voltage is maxed, then make your way to a collector.  Hold down X when you’re getting close to it and you’ll slam your voltage into it and get it charged up.  Once that gauge in front is all lit up and full then the collector will start to drop bombs.  You pick up the bombs and you throw them at Vosik, who will have teleported back to his initial position.

Did I forget to mention that?  I did.  While you’re running around gathering voltage, Vosik is going to teleport around to different spots to try to shoot you and your friends.  If you happen to be heading to a bit of light and he teleports onto your head at the same instance, then you will die. You’ve just been Goomba-stomped!

Now, there are two ways beat down Vosik.  One way takes a lot less time than the other.  We’ll start with the longer way, which is going to require some DPS.

Those bombs that dropped from the collectors?  Well, pick them up as they drop, jump up, and throw them at Vosik.  Aim is relatively important here, so be sure to aim at his head or slightly above it.  If you miss, it’s not horribly important.  The bombs do splash damage, so if you happen to hit the platform at his feet then you’ll still do damage to his shield.  Shield?  What shield?!?

Yes, Vosik has a shield.  The bombs are the only way take them down.  Remember that.  So, you’ve got all those bombs and your fireteam is busy chucking them at Vosik.  His shield is now gone and you still have a couple bombs left?  Throw them.  They do massive damage to his health.  Remember this, also, for later.  This is the time to do DPS.  Remember that Sniper I suggested?  Pull it out and go to town on Vosik’s head.  Hit Vosik with everything your fireteam can dish out including Tether and Warlock Grenades.  There is no need to congregate in one area to take advantage of a Weapons of Light Bubble.  Just shoot the bugger.  You will likely need to repeat this once more.  Twice more if you don’t manage to get good DPS on Vosik.

Now, the other method will likely only take two rounds.  You do everything as before, but you STOP throwing bombs when he has only a sliver of his shield left.  Throw those bombs somewhere harmless or ignore them altogether.  Guess what?  His shield does not regenerate until a certain amount of time has passed which is actually your DPS phase.  This is a key thing to remember.  I’m asking you to remember a lot of things.

So, you’ve gotten his shield down to next to nothing.  You do another round of charge the collectors/generators/whateverthehellyouwanttocallthem and you throw those bombs again.  This time, that’s all you’re doing.  Don’t pull out a gun unless you’ve run out of bombs.  The bombs will do more damage than you can.  He’ll be running away from you before you throw your last bomb in all likelihood.

Once that’s done, go on up and collect your loot!

Okay, okay, I was pulling your leg there.  He doesn’t drop any loot!  Buuuuut, there is a chest up at the top that will have a chance at an exotic drop (up to 385 Light), a legendary Engram, and 2 SIVA Key Fragments.

What in the bloody hell is a SIVA Key Fragment?

Well, I’m glad you asked, because those are your tickets to getting more loot!

Each boss past this Break-In will drop loot for you.  TV Time with Vosik, Death Zamboni Siege Engine Horro Show, and Aksis Is A Teleporting Pain In The Arse.  You’ll receive SIVA Key Fragments at the following rate (this applies per boss):

But you still haven’t told me what to do with them!!!

I know, I know.  I was getting to that.  Patience grasshopper.

Well, you hold onto them is what you do.  By themselves they do nothing.  However, once you have TEN of them, you can convert them into a SIVA Cache Key.  THIS is what will allow you to get more loot.  Those bosses I mentioned earlier that will drop loot for you?  Well, they also drop a SIVA Cache that you can use your shiny new SIVA Cache Key to open up.  What will you get?  It will randomly be anything that the boss you just killed can drop.  Vosik just gave you a Shotgun?  Well, the chest can drop either that Shotgun or the Fusion Rifle, or whatever piece of armor that drops there, which I’m not currently remembering.

There is one other thing that can be done with SIVA Key Fragments.  You can re-roll the perks on any armor that happens to drop for you.  There are perks that don’t change (like Eliksni Immunity [Helmet], Scavenger’s Boon [Gloves], Bomb Disposal Shield [Chest], and In Your Element [Boots]), but the rest are fair game.  Got some Nanomania Grasps with Pulse Rifle Reload speed, but you want Sniper Rifle Reload speed?  Boom.  Re-roll that sucker with 5 SIVA Key Fragments.  This will, of course, have a chance to change the other perks as well, but that’s the gamble with re-rolling.

Okay, I think that I’ve gotten a little long winded with this post, and I need to get more screenshots and videos for the rest of the raid.  There’s only so much I can do solo in this initial section.  I think I’ll leave the next sections for another post.

2 Replies to “Wrath of the Machine: Breaking In”

Have something to say? Share with the class! Cancel reply

I’m just a dad who happens to also be a gamer.

Hey, hi, howdy. Maybe I should use this a little m

Following in the footsteps of my sons.

Sometimes I like to pretend that I can cook. Teriy

So, this is what happens when I lay down on the fl

Load More...
This error message is only visible to WordPress admins