You’ve gone and beaten Vosik into a bloody pulp and stolen all of his loot.  Awesome!  That right there deserves a dance party (on his bloodless corpse)!  On to bigger bosses and better loot!  Oh, and puzzle to boot!

Maybe I should go back to writing poetry…

The Siege Machine can be a fun encounter, honestly, but it can also be aggravating as hell.  Be sure that everyone knows what they’re doing before you get moving across the top of the wall to the next…  uh…  wall.  You’ll see what I mean!

Things to know before you start:

Okay, with all of that out of the way, let’s get down to it!

Oh, and I need pictures and video.  Tonight, tonight, we’ll get that tonight and add them another day.

Okay, go on top of the Siege Engine via the back side after you exit the interior tunnels from Vosik’s room of TV Splendor.  From here you should be able to see a wall in the distance.  Pull out your Sniper Rifle and look around the wall from left and right.  At the base of the wall in the middle is a hole.  Avoid that hole.  You don’t want to fall in and die.  On the right side of the wall (from this angle) there is a container with a Special Ammo crate in front of it (that’s handy, ain’t it).  Your snipers are going to be positioned on top of this. 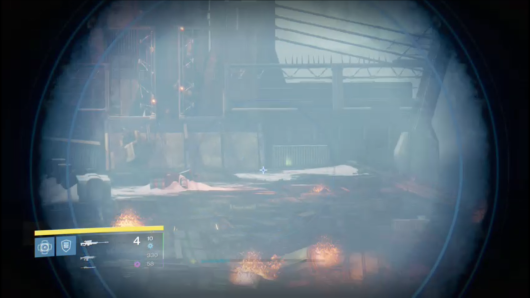 All of that area between where you are now and that wall?  There are going to be Splicers coming out of the metal work there.  They’re going to be gunning for you.  Be prepared for that!  It’s honestly not that bad with the right supers to take care of things.

Alright, now that you’ve gotten a good look at things it’s time to go put yours backs to the wall.  Literally.  Make your way to that wall in the distance and setup like this:

Okay, so your Defender is going to put his Ward of Dawn somewhere in front of the container.  You could roll with either Blessings or Weapons of Light.  Both have their benefits.  Mister (or Missus) Stormcaller is going to wait for the adds to get close and then blast them into oblivion, preferably after the Nightstalker has Tethered them into one mass of Splicerity.  Everyone else?  You’re sniping the guns at the top of the Siege Engine.

Well, crap,  I didn’t tell you to look at that, did I?  Okay, well here’s a picture (patience, it’ll be coming later!).  Do you see the two turrets at the top?  The Guardians not on kill-everything-duty will be sniping those turrets.  Start with the left one.  When that one blows up, snipe the right one.  Got both of them all blown up?  The bulbous thing between them will explode at this point to reveal a glowing red core.  Guess what you’re going to do.  Go on.  Guess.  I’ll wait. 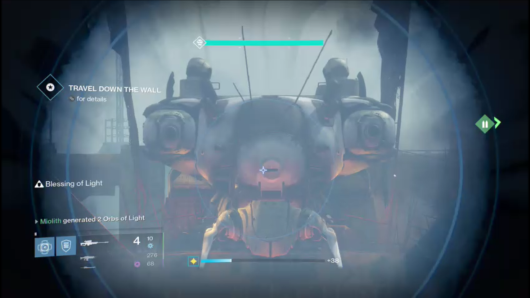 That’s right.  You’re going to snipe that sucker until it blows up.  Wait, wait.  If that’s the core, why is it still moving?

Well, something has to destroy the wall that you’ve been holding up!  So, with that said, dodge the remaining Splicers and jump up onto the Siege Engine.  Look here.  The left side (as you’re facing it) has had a piece that was blown off.  You can safely jump there and ride the Siege Engine through the wall.  Awesome!  Right?!?!

Okay, now, take a quick look around and familiarize yourself with your surroundings.  Done doing that?  Good.  Let’s back to things because your time limit is quickly going away.

Jump off the Siege Engine at the front, but don’t stop!  It’ll run you over.  It will eventually stop, but for now, just pretend it’s that truck from Maximum Overdrive.  You know… the one with the clown face on the front.  Anyway, in the distance you’re going to see another wall.  Bloody walls everywhere!  You’re going to make your way to that wall for the next section.  There is a ship that will appear as you get closer and it will start taking potshots at you.  It will also drop a Captain and his goons.  These you get to kill.  Once you’ve killed them three Siege Engine parts will automagically fall from the ship for you to pick up. 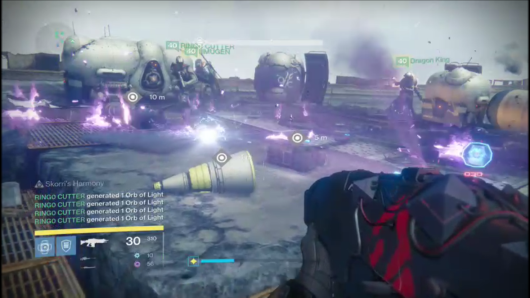 Apparently your antics on the Siege Machine earlier broke it.  Now you get to fix it.

Here is where things get hectic.  There are two paths that you can take.  One is much quicker than the other, but it’s not without its own risks.  The other has less in the way of risk, but I like it better.  Just my opinion.

First things first.  You’re going to have to carry those parts back to the Siege Engine and install them in the proper places.  Hope you brought your tools!  Now, you can’t just carry them straight over there and get the job done.  This is Destiny here.  There are hazards!

You can only carry a part for approximately 10 seconds.  Once that timer is done, you will automatically drop said part.  Please make sure that you are not near a hole when you drop the part!  Instant wipe if you do.  So, go ahead and pick it back up and get moving again!  No, no.  Hold your horses!  You can’t.  You’ll be exhausted from carrying those pixels for all that time and won’t be able to pick a part back up for approximately 5 seconds.  But…  someone else can pick it up.

Along the path that you’re walking along there will be slow mines.  Remember those from Prison of Elders?  Yeah, they’re back, and they make it feel like walking through soup if you’re carrying a part.  You can shoot them to disable them when they pop up, or  you can walk straight through them if you like, but you’ll be slow.  Really really slow.

Now that you know what you’re doing, you’ve got to pick a path.  The path on the left is the lower path.  You’ll wind around the trenches and eventually make your way back to the Siege Engine.  The path on the right is the upper path where you’ll deal with Splicers and ships along the way.  Which path is better?  That is for you to choose for your Fireteam.  One path might work great for one team, but horrible for another.

That being said, it is my opinion that the upper path is the faster of the two paths.  The lower path is actually longer and can leave you with less time to get things done.

So, I’ll cover the upper path here.  The lower path is similar.

Grab a part and move to the right, but stop when you come to the hole with beams across it.  Let the part drop, or switch to a weapon to drop it, but make sure that it’s away from the hole.  Hopefully your Stormcaller has his Transversive Steps equipped so they can leave everyone in the dust with their super fast crouch-walk with a part in hand.  While the parts are on the ground, send someone across to deal with the adds that just dropped from a ship.  This shouldn’t take long.  Grab a part and carefully walk across the beam.  Go until the part drops, but be aware of where you are!  Remember that if a part is dropped and it’s lost in a hole then it’s an instant wipe!

The Guardians who are not actively carrying parts need to be up ahead to clear out any adds that have appeared.  This is very important.  Dark Drinker makes quick work of captains, and Gjallarhorn can clear several adds at once.  These Guardians don’t necessarily have to come back for parts.  Just make sure that the adds are dead.  If it’s clear, then certainly come back for parts.  When the parts are about halfway across the expanse, send one or two Guardians back up onto the Siege Engine.  They are going to go up to the top to kill Meksis, who is the cause of your current hurry.  Kill him and a ramp will drop on the right side (facing it) of the Siege Engine.  This is your way back onto it with the parts.

Ideally the ramp will be down before you get the parts there.  Remember those Stormcallers and their boots!  Trust me when I say they are FAST.

Now, each part has a specific place where it goes.

The Drive Shaft goes in this spot here, which is in the front of the Siege Engine on the right immediately as you come up the ramp. 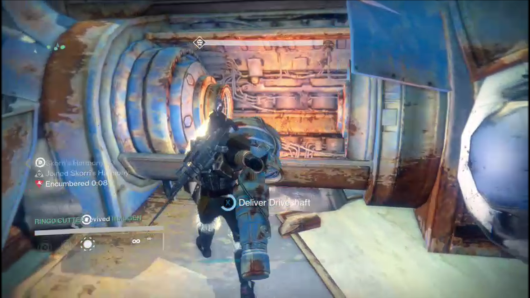 The Warhead goes in this spot here, which is straight on from the ramp and in the middle. 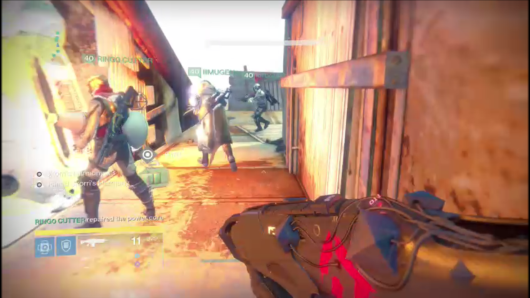 The Engine Block goes in this spot here, which happens to be on the left at the back of the Siege Engine. 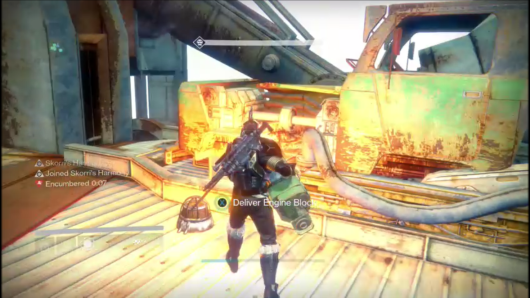 Relay these as best and as fast as you can and you’ll repair this sucker and get on with life.  Go up top and ride that thing to your loot!

By the way, the loot that you can get here is, in my opinion, the best pieces that you can get that will help prepare you for Heroic.  The Gloves have a perk that can cause more Heavy Ammo to drop from Fallen enemies.  Guess what enemies you’re fighting right now?  There you go.  The Chest armor has a perk that causes you to take less damage while carrying a SIVA Charge.  I don’t think that I can stress the importance of this particular piece for the Vosik fight on Heroic difficulty.

You can also get a Rocket Launcher here which is called SOUND AND FURY~.  It’s pretty decent.  You can never get tracking on it, but most bosses in the raid are stationary anyway.  Fast reload.  I like it.

Alright, you’ve gotten your loot from the boss chest and the SIVA Cache and the Exotic chance chest and you’re ready to move off.  Go jump down the hole.  Go on.  You’ll be okay.  You don’t trust me, do you?

You don’t.  Did you ride the Siege Engine down?  Figures…  Don’t do that!  You’ll just die!  Unless you’re really good and then land where the chests are…

2 Replies to “The Death Zamboni”

Have something to say? Share with the class! Cancel reply

I’m just a dad who happens to also be a gamer.

‪How about some baked BBQ chicken with sauteed m

You got me earlier so now you get Jake. Look at th

The face of boredom at work. And one still partly

Well. My Redbuds are in full bloom.

Load More...
This error message is only visible to WordPress admins